India set themselves up for a series victory on Wednesday in the most brutal manner possible, with help from Sachin Tendulkar, who brought up one-day cricket’s first ever double-century. Master blaster Sachin Ramesh Tendulkar created history to became the first ever ODI batsman to make 200 runs in an innings. India made 401 for 3 in the allotted 50 overs and have set a 402-run target for South Africa at the Roop Singh Stadium at Gwalior in the 2nd ODI played between India and South Africa.

Sachin Tendulkar made 200* and rewrote history in Gwalior with 25 fours and 3 sixes. MS Dhoni (68*) also fired on all cylinders to propel India to 401/3. Earlier, India won the toss and elected to bat. Nobody has seen God, but the God of cricket was seen by everyone playing at the Capt. Roop Singh stadium at Gwalior, India, going past the 194 made by Zimbabwe’s Charles Coventry and Pakistan’s Saeed Anwar, and to say that historians of cricket will remain busy so long as Sachin keeps batting.

Sachin Tendulkar is the greatest player ever in the history of cricket and India is extrmely proud that he is son of India. English vocabulary has failed, adjectives have failed, dictioneries have also failed to describe the phenomenon that Sachin is. The South African attack was mauled by him and was ably supported by skipper M,S.Dhoni who make a quick fire 68. Sachin hit 3 sixes  and 25 fours in his 200 not out. 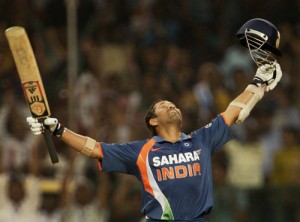 He went past Kapil Dev’s 175 with a towering six over long-on. He equalled his highest score of 186 with a pull to fine leg, before Dhoni sent the South African’s on a leather hunt. When Sachin reached 200*, he raised his bat, took off his helmet and looked up at the skies.

There was just no letting up. The short boundaries and the flat pitch were too inviting for Tendulkar. Virender Sehwag’s dismissal for 11, caught at third man, was just an aberration as Dinesh Karthik, Yusuf Pathan and Dhoni hit  bounderies and lofted sixes.

The two 100-plus stands, with Karthik(79) and then with Dhoni (68) were vital building blocks. Karthik rotated the strike well in their stand of 194, struck three clean sixes and made a quick  half-century. That partnership sent signs to the South Africans that India was in for a huge score.

Dhoni also made a quick-fire 68 hitting four sixes. The crowd, thrilled with the entertainment, were desperate to see Tendulkar achieve the 200 mark. Dhoni tore into Steyn for 17 off the 49th over and retained the strike for the 50th. After hammering the first ball of the 50th for six, he shoveled a full toss to deep midwicket where Amla made a brilliant save. Tendulkar settled for a single and the crowd were on their feet. He reached his double ton and Dhoni closed the innings with a four to long-off.

South Africa lost wickets at regular intervals Hashim Amla 34 and de-Villiers 114 were the main contributors to their total of 248. For India, Srisaanth took 3 for 49, Nehra 2 for 60 and Jadeja 1 for 40.

The presentation ceremony took place immediately after the match and the following awards were given :-

– Twenty years in Cricket        –  Sachin Tendulkar – A silver Cricket Bat, Rs. Ten lakhs cash and a pavillion to be named
after him  by   the Gwalior Cricket Association.

Consequent upon hitting the double hundred, Sachin Tendulkar became a  trending topic on Twitter and millions of people from all over the globe conveyed their reactions to him through the fastest media on earth.